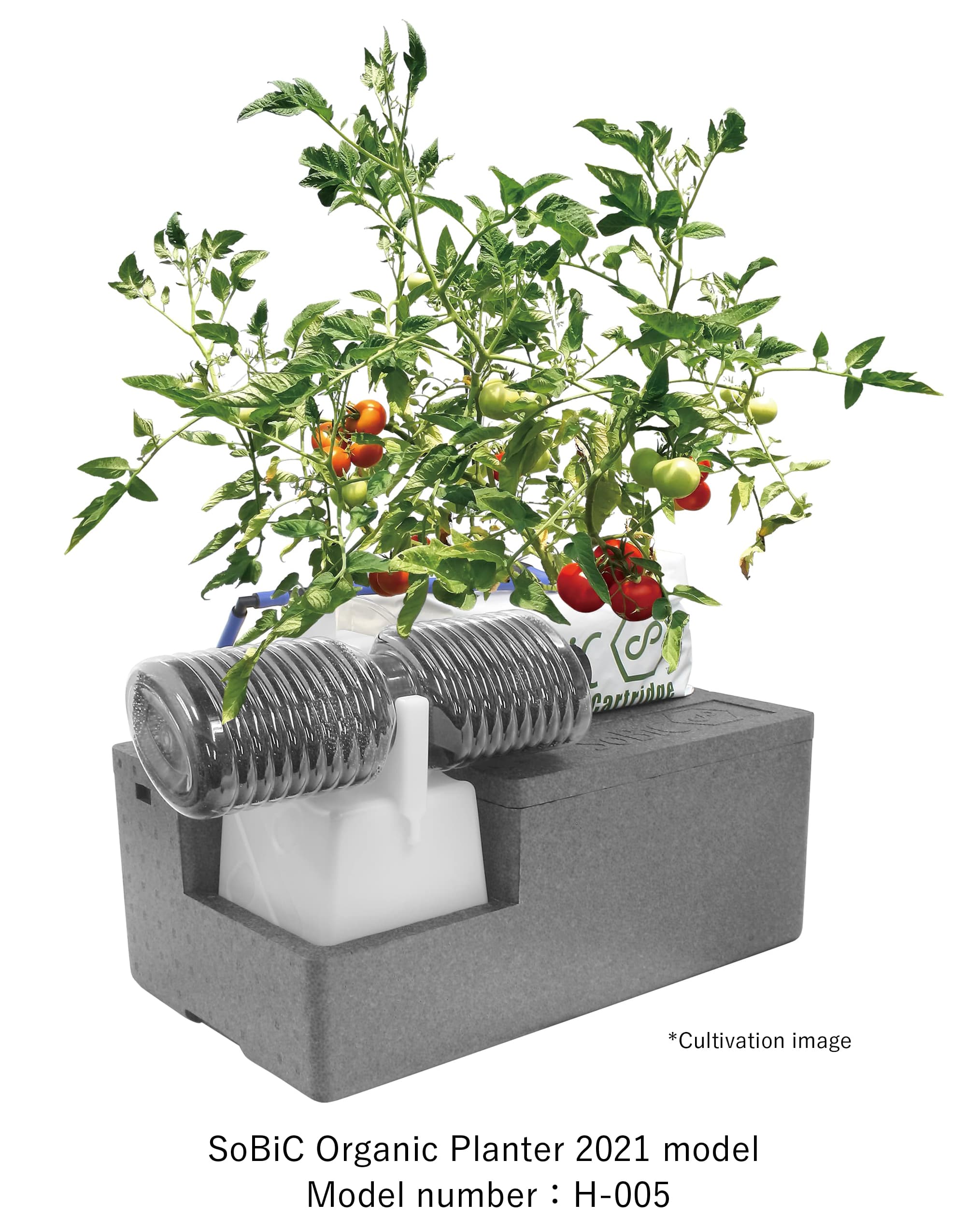 NATUREDYNE. INC (CEO Keiichi Nakajima, Tokyo, Japan. hereinafter "ND") will launch their 2021 model of the very unique mobile-type micro-farming equipment named "SoBiC" (an acronym of Solar pneumatic Bio-Cycle) that works fully automatically in spite of not using any electricity nor machinery, on March 15, 2021.

SoBiC is full-automatic cultivating system that does not use any electronic nor mechanical devices, working through a unique self-drive system (ref.1) in accordance with changes of atmospheric temperature and air pressure which are caused by heat from the sun. Taking advantage of such natural physical phenomenon which can be called "the breathing of nature", it activates autonomous water circulating pump system, at the same time also activating natural eco-system, and the environment inside the soil is always well-conditioned by its natural balancing function. Consequently, plants grow bigger and faster in comparison with normal cultivating methods. Therefore, the outstanding basic mechanism of SoBiC brings a variety of huge merits. One of these merits is that it can overwhelmingly keep water consumption to a bare minimum (the saving ratio is up to over 90% roughly in comparison with normal watering by sprinkler; ref.*2). The other big merit is enabling a realization of the highest production efficiency as it can minimize many other inevitable costs of cultivation such as human hustles, electricity, machinery, ensuring a certain size of land and maintaining a farm-able environment. SoBiC was invented in 2015 and was put on the market in 2016 to the household hobby domestic market. Up to now this 2021 model is the 5th generation which has dramatically evolved and been simplified to its ultimate level. With the substantial accumulation of experience, research and improvements done every year a significant rise in the efficiency, stability and durability of the whole system has been seen. With such fundamental improvements, come even more enhancements towards its other superior features like convenience to install and use, higher mobility as well. It now has a very innovative structure that can enable a new style of farming model as "mobile scale-out", realize simple and limitless expansion one by one as long as there is a sunny & warm place anywhere with only minimum water required. This makes it possible to realize efficient mass production as the result.

Needless to say, Agriculture has always been the biggest primary industry since ancient eras, using the biggest amount of land on Earth for farming and with the biggest consumption of natural resources in order to supply adequate food for the growth of a peaceful human society. And it has been growing in accordance with population growth until now.
However, at the present it faces a limitation of growth the same as other all industries in the whole world. However, the limit of growth for the agricultural industry is the most serious problem where they present huge and empty economic situation like chronic illnesses due to obesity due to vicious lipids and the population has grown to 8 billion. The situation is that food demand is already overwhelmingly beyond supply. Food production will shift to decrease. The fatal factor in decreasing food production is water shortage. 70% of the water consumed by humans is used to produce crops for agriculture, most of which depends on groundwater and according to the latest scientific reports, there are warnings that agricultural groundwater around the world will definitely be depleted within 10 to 20 years following the current consumption trend. Specifically, grains that occupy most of the foods for human are produced on vast topical desert areas by consuming huge amounts of groundwater and chemicals such as fertilizers. This is the typical mass production model which has simply scaled up to be too huge to remain sustainable, accelerating natural resource depletion, destroying eco-systems and the natural environment.
Up to now, in addition to such food crises due to ecologically quite unreasonable agricultural mass production, climate change due to global warming has caused the spread of diseases and viruses, outbreaks of pests like grasshoppers, intensification and increase of natural disasters such as large scale floods and forest fires too. Many scientists around the world have warned that these deadly problems are growing like a negative spiral and that the agricultural production environment will be in crisis in the near future as long as we carry-on with present production styles. In that serious situation, SoBiC can be the most effective and easy solution because of its outstanding cultivating system performance. As explained its features above, it safe to say that SoBiC's growing plants efficiency per unit of area is the best as all-in-one cultivating method and system to ever exist. SoBiC is available to grow all kinds of crops such as vegetables, root vegetables, grains, fruits, etc. through adequate adjustment or customization for respective production requirements. And it also allows for expansion of production by increasing the number of the units in order to mass produce, so it can be a radical solution as the new mass-production model to name "mobile scale-out".

For creating an affluent sustainable society after the COVID-19 Pandemic
Currently, the whole world is in the midst of a coronavirus pandemic, and all the economic activities are suppressed, there is suffering to people's health and the global economy too. However, no one has clearly pointed out the "root factor" of the pandemic and there are many "more serious problems", and everyone looks away from it, mostly being falsified, and not considering being properly dealt with. Such a distorted situation even deepens the seriousness and darkness.
In the first place, the present world industrial economy has been built on the sacrifice of natural resources and the destruction of the environment on the earth, such "unreasonable and distorted economic growth" is to be ended and forced to be totally changed, otherwise the present pandemic is just the beginning to the end of the world.
Global warming, climate change, environmental destruction and pollution caused by human economical activities are getting worse, then regardless of good or bad, single-celled bacteria and viruses quickly respond and are changing, evolving, mutating and exploding in an invisible ecological world within the pico-size dimension. As an actual fact, the 21st century shall be called "the virus century", as many contagious illnesses have occurred and spread such as SARS/MERS/bird flu/swine fever/corona/new type corona (COVID-19) since around year 2000. Therefore, it is not difficult to predict that much stronger and worse viruses will be coming up continuously even if the present pandemic was settled by a specified vaccine. No matter how much science and technology evolves in the future, there is no way humans can win for the competition of developing vaccines against virus outbreaks caused by natural phenomena. It is obvious that there is no meaning to try to rebuild the industrial economy as it existed in the past. We must recognize that the present restriction of CO2 emissions is mere campaigning without reality and SDGs is just a dream without any concrete plan. We humans have already been driven to a corner to face the actual reality, find out a radical solution and move on soon.
SoBiC cannot solve all the problems by any means, but it can achieve a reduction in anxiety for "food safety" and a "stable food supply" at least. And if SoBiC spreads, an "increase of food production" and "absorption of CO2" will proceed at the same time, creating healthy new industries in the new industrial frontier with a huge demand, and employment will expand accordingly, that exactly achieves two or three things at the same time. It is also possible to create such a "chain of virtuous circles". As a result of repeating such a virtuous cycle, enabling the rebuilding of a prosperous and sustainable society without so much difficulty.

Worldwide sales launched
As ND develops in Africa, and other parts of the world, food security remains a priority in our development agenda, and to this end, we will put deliberate effort to boost growth in this sector. In this regard, ND is keen in achieving of sustainable development goals (SDGs) as envisaged in the Global Agenda for sustainable Development and eradication of hunger by 2030.
Demands and needs for SoBiC are greater overseas than in Japan as there are so many people who are in serious trouble for water in the world. Actually, ND has received many inquiries from overseas, but could not cope with that positively because of there were some difficulties with stable operation to ensure the guarantee for the previous model. However, with this 2021 model, those issues are cleared, improved significantly and completed to the ultimate level.
From now, ND will flexibly respond to inquiries from overseas and will support case studies to use SoBiC in various cultivations in various environments. Special version (ref.*3) for export starts on sale to delivery from one unit.

*1 The technology comprising SoBiC has already been patented in more than 30 countries worldwide, which proves that there has been no similar technology.
*2 This is roughly comparable with the general news report that the amount of water required to make one tomato through normal watering is 50 liters. In actual experiments, SoBiC consumed only 2 liters to make one under normal conditions in Japan.
*3 The export version does not include soil with which complicates procedures to export. And it added special cartridge bags with which the user can put local soil into.