Gravity Reactors could be the dreamy power generator. 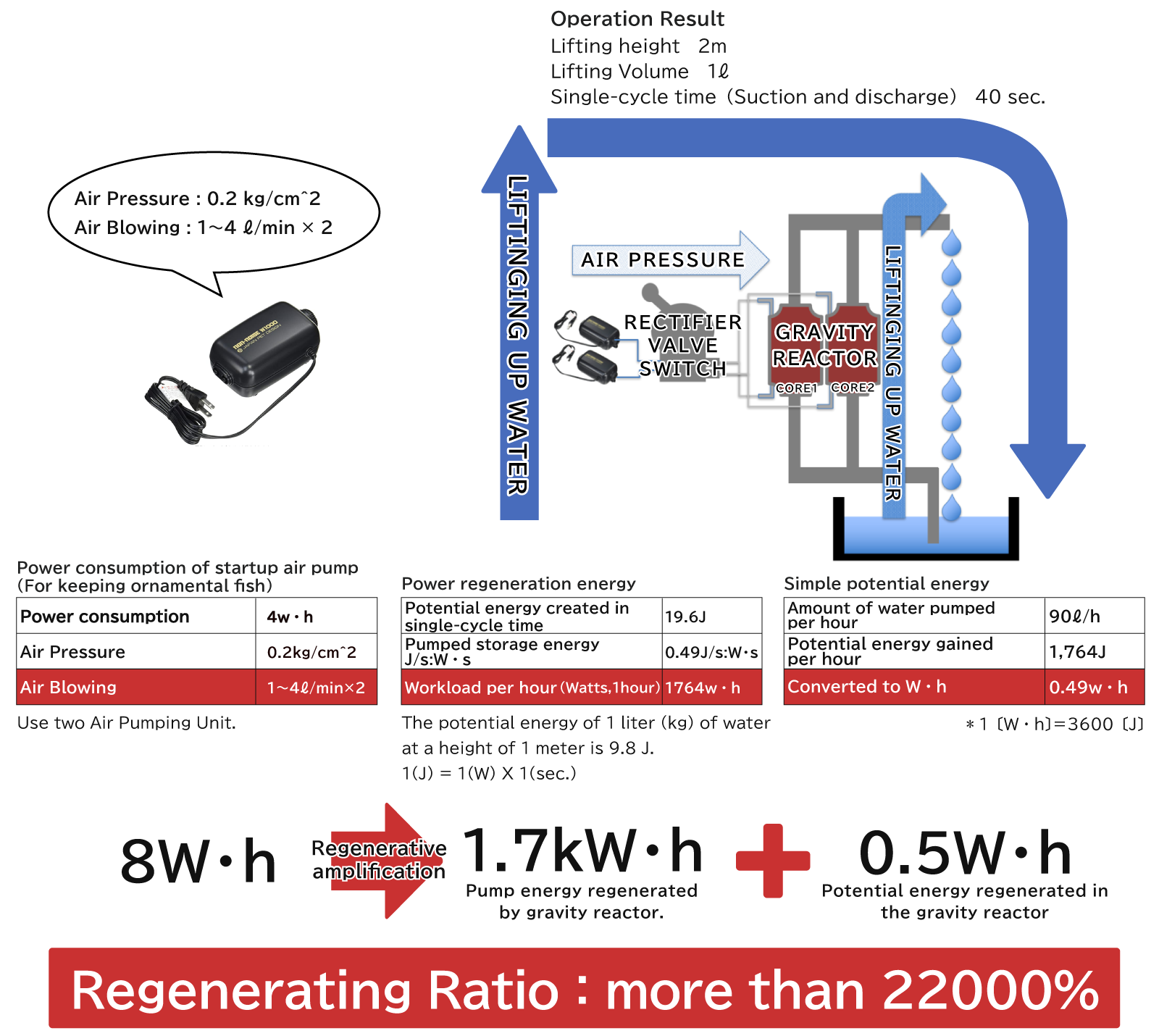 An unthinkable world becomes a reality!

This Gravity Reactor has developed during experiments and research on SoBiC (an automatic plant cultivation system that uses a circulation pump to automatically operate itself with only subtle changes in air pressure due to solar heat, which is the Start-up business for ND). In the process of research and development to further improve the efficiency of SoBiC, there were many phenomena and discoveries that were completely unexplainable by fundamental physics and mathematics.
In other words, this technology is absolutely different from existing theoretical physics (what happens is always different from theoretical values), mathematical calculations, and analysis using digital and other mathematical formulas, and is a completely new technological system based on a special vision, image, structure, and configuration technology. The physical structure of the system itself is very simple, requiring neither high mechanical precision and strength, nor complicated operation, making it extremely easy to scale up (large-scale power generation) or scale out (mass production of small-capacity power generation systems).
If this Gravity Reactor becomes widespread, it helps to realize zero carbon emissions easily without environmental damage, existing large-scale power generation equipment or power transmission equipment such as transmission lines and substations, and if it is a "place with gravity", this is it. It makes it possible to supply inexhaustible energy on the spot. 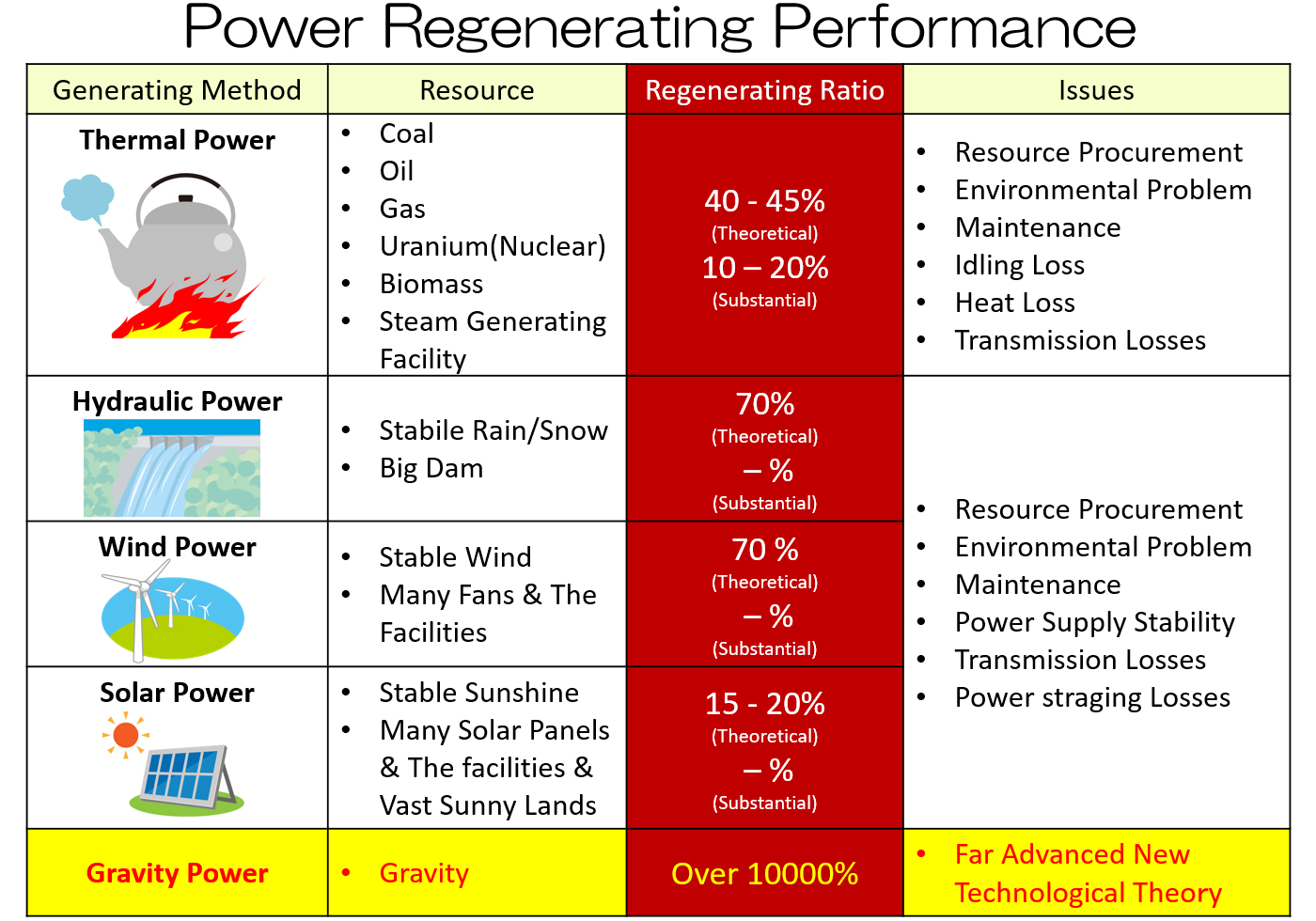 Toward the spread and development of technology.

The "Gravity Reactor" is a new technology like a dream, but there are some problems to be solved for practical use.
First is that the more scientists who have studied fundamental science theory (cutting-edge science and technology, such as digital and other virtualization technologies that complicate the string of numbers to infinity, or electrical robotics), the more difficult this new technology seems to be to understand. Traditionally, guidelines for technological development have been extremely vague, and they reject completely different and new technological systems that cannot judge their own standard.
The other is that this new technology enable replacing energy derived from fossil resources such as coal and oil, which have supported the world's social economy for many years since the Industrial Revolution, so that it will drastically change the balance between supply and demand of fossil resources and create severe conflicts. While CO2 emission restrictions are being called for in various countries around the world, such as recently held COP26, which was held recently, extremely challenging emission cut targets have been set. However, such plans and measures lack reality.
In this context, gravitational power generation using this technology will become a major means of energy production soon, but it is very difficult to peacefully promote such structural changes in the world.

As said above this system must be unbelievable in the fundamental science theory until customers actually see the system running with their own eyes.
Therefore, ND plans to hold a technical seminar around the end of December to show the system that will actually run with energy amplification with "regeneration efficiency of over 20,000% " to allow seminar participants to touch and feel the falling water. The seminar will also address an outline of the technology, practical utilization plan in the very near future and technology licensing.
Details of the seminar will be announced on this website soon. If you would like to receive the seminar information by e-mail, please register using the form below.

If you would like to receive information about the seminar, please fill in the required information below and click the send button. We will send you the information by e-mail later.

The seminar is intended for business use only. Please refrain from applying for the seminar for the general public.

Please make sure that you can receive e-mails from the "@naturedyne.com" domains.

-Seminar Postponed-
Due to a problem with the demonstration system, the seminar will be postponed.We will send out a call for applications once the specific dates are determined.